charity event in honor of a California police officer killed in a mass shooting in 2018 is being postponed indefinitely because supporters of President Donald Trump were on the invite list. 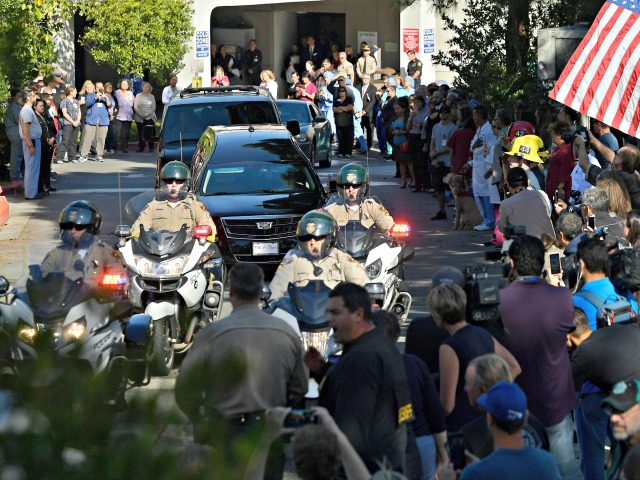 Fox 11 Los Angeles reported that a local police chief and a Democrat politician derailed the charity flag football event set to honor slain Ventura County Sgt. Ron Helus, who died during a mass shooting at a bar in 2018, because two outspoken Trump supporters would be in attendance.

The “Blue Bowl” was supposed to take place this Sunday, and thousands of dollars have already been raised for Helus’s family. But all the money raised is now being returned to donors because event organizers said Thousand Oaks Police Chief Tim Hagel convinced organizations not to associate with the event.

Hagel reportedly said he withdrew his support from the event after learning that Scott Baio and Joy Villa, both open Trump supporters, would attend the event.

Mike Randall, vice president of the Fallen Officers Foundation and organizer of the charity event, said Hagel reached out to him questioning why he invited Trump supporters to the event.

“He basically said over and over in the conversation this is not Trump country, that the slogan ‘Make America Great’ is not favorable, popular, within 1,200 square miles, that we don’t want Republicans here, I could not believe it,” Randall told Fox 11 Los Angeles.

Rosemary Zore, founder of the Robert L. Zore Foundation and another organizer of the event, told Fox & Friends that the event was not political and was all about uniting the community and honoring law enforcement.

“It’s about remembering the hero, honoring the family, and uniting the community. We had an agenda. We told them everything that we were going to be doing,” said Zore, who started her foundation to honor her father.

The ‘Blue Bowl’ event was represented as a charitable flag football tournament to raise funds for the family of Sergeant Ron Helus. An event that would honor Ron’s memory and provide support to his wife Karen and son Jordan. As the event began to materialize, we became concerned with the behavior of some of the organizers of the event. Although I believe the organizers had good intentions, the event was moving in a direction we no longer felt comfortable supporting.

Fox 11 reported that the invite list had been bipartisan, as California Gov. Gavin Newsom’s public safety liaison, a Democrat, was also invited. But invitees to the event were incensed that a charity event would be canceled over politics.

Joy Villa sent out the following statement when she learned the event would be canceled:

I was gonna come up from Hollywood to support this, this is not okay, this is prejudice, hello? You’re shutting down an event because of the way conservatives think, because I support the president? This is disgusting, I’m appalled, and in all my years being an out conservative, I’ve never seen something so despicable like this.

The “Blue Bowl” is an annual charity event meant to honor fallen police officers killed in the line of duty. The co-ed flag football tournament raises money for the families of the fallen officers.

UNHINGED, UNEMPLOYED, UNDER-PERFORMING AND UNDER FIRE!

The Truth About Extinction Rebellion

Piers Morgan laughs off a petition calling for him to be...