Leftist Canadian Prime Minister Justin Trudeau repeatedly referred to his past use of brownface and blackface as “makeup” in an extended Q&A apology with reporters late Wednesday. 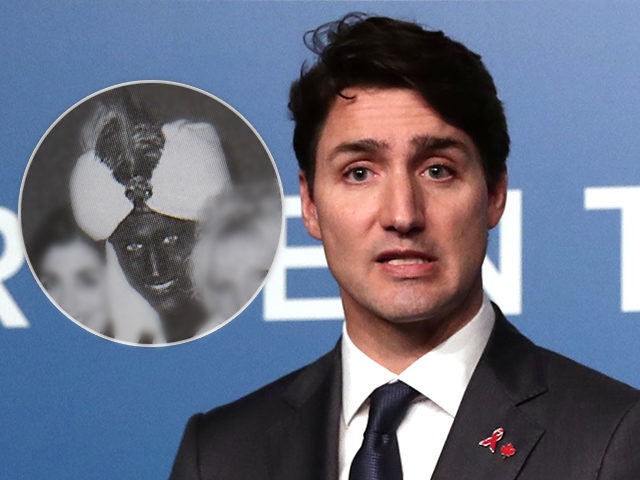 Trudeau held a press conference after an image surfaced of himself dated from 2001 dressed in what he described as an “Aladdin” costume, wearing skin paint that made him appear black and an oversized turban and grabbing a woman by the neck. Time magazine, which published the photo, revealed that Trudeau wore the politically incorrect outfit to an “Arabian Nights” party at a private school where he worked as a teacher. The photo was featured in the school’s yearbook, where students could see and potentially emulate his behavior.

Exclusive: TIME has obtained a photograph of the Canadian prime minister wearing brownface makeup to a party at the private school where he was teaching in the spring of 2001 https://t.co/kSTAGinF6R pic.twitter.com/gi4Nwx4tXh

Trudeau was 29 years old at the time the photo was taken — far older than other political figures who have apologized for racist behavior in their adolescence.

UPDATE: Another photo of this even has been found, with Trudeau apparently embracing Sikh men.

There is a second photo of Justin Trudeau in brownface, from the same 2001 incident. This is from the school’s newsletter (he was a teacher at the time) https://t.co/Thg7mzVcJe pic.twitter.com/YZMda2hpkU

Following the publication of the photo, Trudeau revealed that he had donned blackface in high school to perform Harry Belafonte’s “Banana Boat Song (Day O).” A photo later surfaced of a young Trudeau in a 1970s outfit, Afro wig, and dark skin paint. The outfit did not appear to be a costume intended to look like Harry Belafonte.

Canada’s CBC broadcaster referred to the image as “makeup” on Twitter and rapidly corrected to the proper term, “blackface.” Trudeau does not appear to have made the same correction at the time of this writing.

In a transcript of his remarks to reporters on Wednesday by the Toronto Star – which the Star notes omit his comments in French, though it does not indicate that they deviated significantly from what he said in English – Trudeau refers twice to wearing “makeup,” without ever describing it as “blackface” or “brownface.”

“I attended an end-of-year gala where the theme was Arabian nights. I dressed up in Aladdin costume and put makeup on. I shouldn’t have done that. I should have known better, but I didn’t. And I’m really sorry,” Trudeau told reporters.

Asked if he had worn similarly racist outfits on other occasions, he said, “When I was in high school, I dressed up at a talent show and sang ‘Day-O’ with makeup on.”

Trudeau described himself as “pissed off” that he had put himself in the position he was in and asked Canadians to see that “I have worked all my life to try to create opportunities for people, fight against racism and intolerance.” He added that the photo publication could be a positive event for Canada.

This is part of the reflections we all have to have on how we judge the mistakes we’ve made in the past, how we take responsibility for them and how we keep moving forward as a society, recognizing we do need to do more to fight anti-black racism, systemic discrimination, unconscious bias, all the things that are present that I’m certainly not immune from. I think there is a significant reflection that I’ve had over the past while on this. And if it leads other people to have reflections, that’s a good thing, but this is very much about me taking responsibility for an action I shouldn’t have taken.

“I didn’t consider it a racist action at the time, but now we know better. This is something unacceptable and it is racist,” Trudeau emphasized.

“The fact of the matter is, that I’ve always — you’ll know this, been more enthusiastic about costumes than is somehow — is sometimes appropriate, but these are the situations that I regret deeply,” Trudeau added, presumably referring to several international embarrassments in which he appeared in the ethnic garb of communities that he does not belong to, such as his use of traditional Indian clothing while on a visit to the Asian country. Trudeau has also publicly worn the ceremonial headdress of First Nation communities in Canada, though on that occasion the Tsuut’ina First Nation granted him honorary permission to wear it.

He also clarified that the woman whose neck he appears to be grabbing in the photo is “a close friend” but did not identify her.

Some Canadian observers noted Trudeau’s insistence on referring to brownface and blackface as “makeup.”

“Makeup is what people wear to enhance or improve the look of their skin. Makeup is what even I might wear to a wedding this weekend,” the National Post‘s Christie Blatchford wrote in response to the press conference. “Brownface ain’t makeup. Brownface is having a laugh at someone with dark skin.”

Blatchford noted Trudeau’s harsh condemnation of conservatives caught in racially sensitive situations, noting, “it’s his hypocrisy that is so galling.”

Trudeau joins several other prominent left-wing figures in being exposed as having worn blackface. Among politicians, the most prominent modern case is that of Governor Ralph Northam (D-VA), who appeared in a yearbook photo of a man in blackface standing next to a man in a Ku Klux Klan hood. Northam said he was definitely in the photo, but could not remember which person he was.

Left-wing celebrities in America like Joy Behar and Sarah Silverman have also worn blackface. NBC daytime host Megyn Kelly was pulled off the air around one year again for defending the practice.

Gulalai Ismail: Activist in hiding flees Pakistan for the US

Nolte: New York Times Admits ‘We Built Our Newsroom’ Around...