In an address at Georgetown University, the Facebook chief executive called for more free speech — not less — as his company has been assailed for allowing lies and falsehoods to appear. 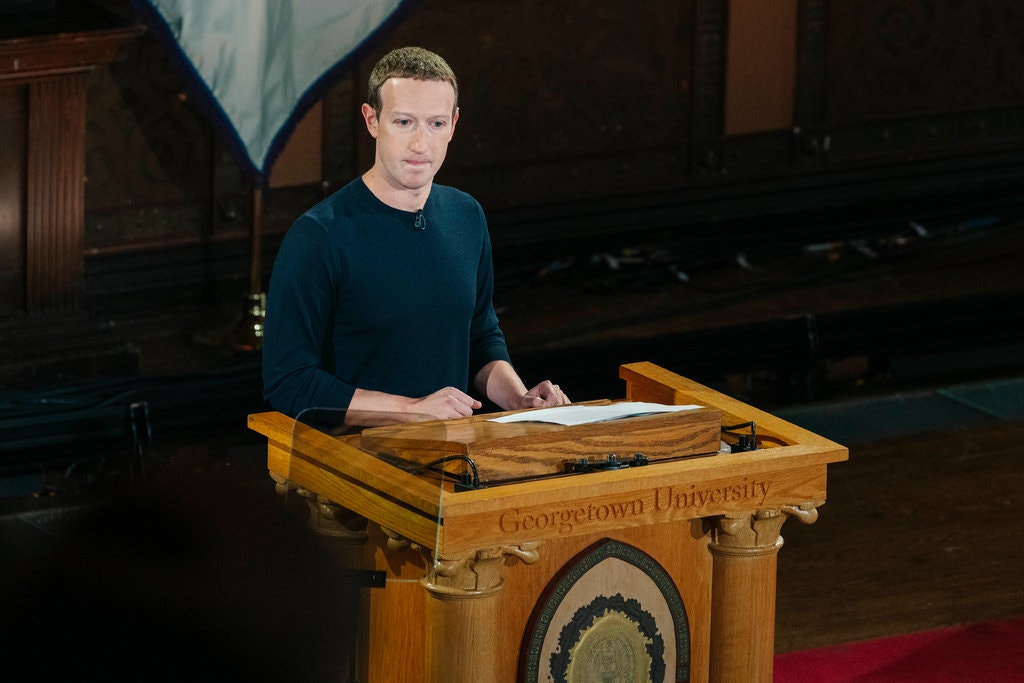 WASHINGTON — Senator Elizabeth Warren recently accused Facebook of being a “disinformation-for-profit machine.” Marc Benioff, chief executive of the online software maker Salesforce, said the social network “needs to be held accountable for propaganda on its platform.” And regulators around the world are examining whether to break the company up or clip its power.

Under fire on all sides, Mark Zuckerberg, Facebook’s chief executive, went on the offense on Thursday against his critics.

In a winding, 35-minute speech at Georgetown University’s Gaston Hall — where presidents and foreign heads of state have delivered addresses — Mr. Zuckerberg fought back against the idea that the social network needed to be an arbiter of speech. He said that Facebook had been founded to give people a voice and bring them together, and that critics who had assailed the company for doing so were setting a dangerous example.

To make his case, Mr. Zuckerberg invoked Frederick Douglass, the Rev. Dr. Martin Luther King Jr., the Vietnam War and the First Amendment. He contrasted Facebook’s position with that of China, where the authorities control and censor speech, and which he tried unsuccessfully for years to enter to turbocharge his company’s business.

“People having the power to express themselves at scale is a new kind of force in the world — a Fifth Estate alongside the other power structures of society,” Mr. Zuckerberg, 35, said.

He added that despite the messiness of free speech, “the long journey towards greater progress requires confronting ideas that challenge us.”

“I’m here today because I believe we must continue to stand for free expression,” he said.

The address was an unusually public doubling down by the tech billionaire on a free speech stance that has been highly criticized. It was a sign of how Mr. Zuckerberg was trying to reposition Facebook in a politicized environment where the company had been accused of amplifying disinformation, hate speech and violent content. Facebook is also under scrutiny for the power it wields over social media and is grappling with emboldened governments around the world that want to regulate it.

In recent weeks, Facebook’s challenges have piled up. In Europe, the region’s top court ruled this month that individual countries could order the company to take down posts not only in their own countries but elsewhere. Several of Facebook’s partners on a cryptocurrency initiative dropped out after regulators complained. And the company found itself in the eye of a storm in the United States — including with Ms. Warren, the Massachusetts senator who is running for the Democratic presidential nomination — over how to treat political speech.

But even as Mr. Zuckerberg tried to strike back on Thursday, his speech was blasted.

“Zuckerberg attempted to use the Constitution as a shield for his company’s bottom line, and his choice to cloak Facebook’s policy in a feigned concern for free expression demonstrates how unprepared his company is for this unique moment in our history and how little it has learned over the past few years,” said Bill Russo, a spokesman for the presidential campaign of former Vice President Joseph R. Biden Jr.

Later on Thursday, Ms. Warren took aim at the company again in a tweet: “Facebook is actively helping Trump spread lies and misinformation. Facebook already helped elect Donald Trump once. They might do it again—and profit off of it.”

One of Dr. King’s daughters, Bernice King, also tweeted that she had heard Mr. Zuckerberg’s speech and his reference to her father.

“I’d like to help Facebook better understand the challenges #MLK faced from disinformation campaigns launched by politicians,” she wrote. “These campaigns created an atmosphere for his assassination.”

I heard #MarkZuckerberg's ‘free expression’ speech, in which he referenced my father. I'd like to help Facebook better understand the challenges #MLK faced from disinformation campaigns launched by politicians. These campaigns created an atmosphere for his assassination. 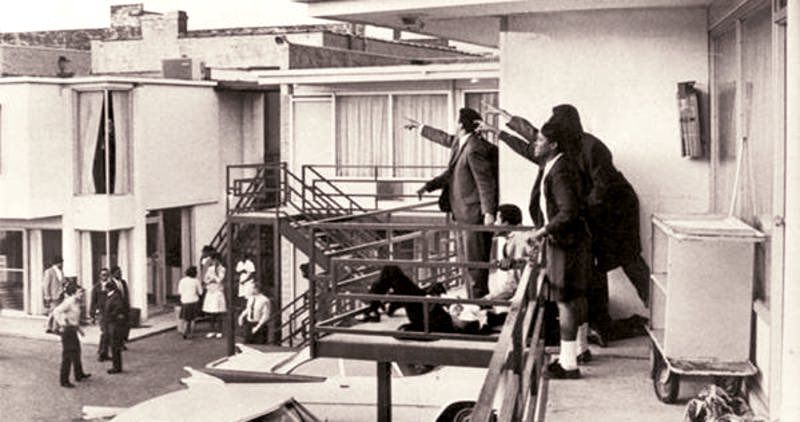 15.2K people are talking about this

Mr. Zuckerberg’s speech was prompted most recently by a sweeping policy that Facebook unveiled last month. In it, the company said it would not moderate politicians’ speech or fact-check their political ads because comments by political leaders, even if false, were newsworthy and in the public’s interest to hear and debate.

Facebook’s policy on political speech was quickly put to the test this month when the Trump campaign released a 30-second video ad that falsely claimed Mr. Biden committed corrupt acts in Ukraine. The ad played across social media outlets and on some broadcast networks; CNN and NBCU declined to air it because they said the ad violated their standards.

When Mr. Biden’s campaign asked Facebook to take down the false ad, the social network refused. Ms. Warren later dared Facebook by deliberately creating an inaccurate political ad that said Facebook and Mr. Zuckerberg were backing Mr. Trump’s re-election, even though neither Mr. Zuckerberg nor his company have announced their support of a candidate.

“We decided to see just how far it goes,” Ms. Warren said of Facebook’s openness to leaving up false political ads.

Civil rights groups said they were stunned by how hands-off Facebook was being on political speech. Giving politicians free rein to post any material — even lies — potentially sets up the social network for more disinformation efforts ahead of the 2020 election, they said.

Vanita Gupta, president of the Leadership Conference on Civil and Human Rights, a coalition representing 220 civil rights groups, said she spoke to Mr. Zuckerberg last week to express alarm about the policy. She said he told her the public could make its own determinations about false statements and racially divisive content from politicians.

“Mark Zuckerberg is co-opting civil rights history to try to justify Facebook’s policies that do long-term damage to our democracy,” Ms. Gupta said. “The company is in denial about what’s happening.”

Neil Chilson, a senior research fellow at Stand Together, an organization within the Koch network, a conservative policy group, said Facebook’s free speech position was “a very reasonable policy choice.” When Mr. Trump speaks, reporters then fact-check what he says, showing “that the cure to a politician’s misstatement is more speech, not to shut it down,” Mr. Chilson said.

Mr. Zuckerberg decided in recent days to speak at Georgetown University as the debate over Facebook’s position on political discourse became louder. On Wednesday, he posted on Facebook that he was writing a speech that was “the most comprehensive take I’ve written about my views, why I believe voice is important.”

He will continue his public offensive on Friday, when an interview with Dana Perino of Fox News is scheduled to air. Next week, he will be in Washington for a hearing on the company’s cryptocurrency project, called Libra. It will be his second time testifying in front of Congress after April 2018, when he answered lawmakers’ questions on Facebook’s treatment of user data.

In an interview at Facebook’s Silicon Valley headquarters on Tuesday, Mr. Zuckerberg laid out more of the reasoning behind his speech. He cited Facebook’s role as an American company — one that can espouse Western ideals such as free expression — and mused on how the social network would be viewed in time.

“Today, the state of the global internet around the world is primarily defined by American companies and platforms with strong free expression values,” he said. “There’s just no guarantee that will win out over time.”

Mr. Zuckerberg acknowledged in the interview that his position would not satisfy everyone. But he said he wrote the address to lay out how he wanted his company to operate long into the future — including the far-off day when he is no longer running Facebook.

“I hope this is a moment for us to put our place in history in perspective,” he said.

At Georgetown University on Thursday, long lines of students snaked into the hallways as they waited to hear Mr. Zuckerberg. Questions from the students were collected ahead of the speech. Journalists were not permitted to ask Mr. Zuckerberg questions.

During the speech, Mr. Zuckerberg said he had considered banning political ads from Facebook. But he said political advertising could be considered part of speech and the slope of deciding which issues were political and which were not would be too slippery to navigate. He added that political ads were a negligible amount of Facebook’s $55.8 billion in annual revenue.

Afterward, Mr. Zuckerberg was whisked off the stage and students — including President Trump’s daughter, Tiffany Trump, who attends Georgetown’s law school — filed out of the 700-seat auditorium.

Mr. Zuckerberg later met briefly with the president of Georgetown, John J. DeGioia, and stayed on the leafy campus to record the interview with Fox News. Then he went to the airport to fly back to Silicon Valley.

Mike Isaac is a technology reporter based in San Francisco. He covers Uber, Facebook and Twitter, among other companies​. He previously worked for Re/Code, AllThingsD and WIRED, and began his career writing about music for Paste Magazine and Performer. @MikeIsaac • Facebook

How much of Johnson's 'great new deal' is actually new?

Cabot Phillips: Dems don't want Biden in 2020 and many can't name his accomplishments

Apple’s New Mac Pro to Be Assembled in Texas After Tariff...